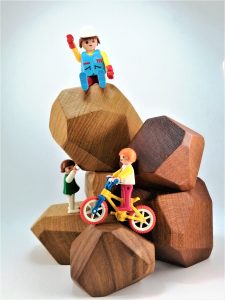 OK, so this is a slightly (very) biased guide, but when I first got interested in making Tumi Ishi I spent a lot of time looking at how other people have approached this, and the feedback from buyers for the different block types on offer.

As a quick aside for the uninitiated, I should explain that “tumi ishi” in Japanese is variously translated as pile of rocks, or balancing stones. It is thought to have its roots in the practice of balancing rocks on top of each other – as seen on beaches and riversides around the world as well as in Zen gardens. In a wooden toy context, Tumi Ishi are wooden balancing blocks – but not the regular square and rectangular blocks. Tumi Ishi blocks have many irregular faces, allowing – indeed requiring – more variety and ingenuity to balance them. 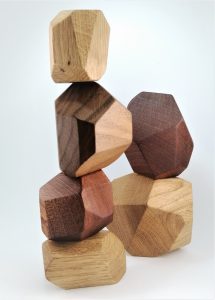 The benefits of Tumi Ishi as a toy include improving fine motor skills, understanding of balance, as well as helping concentration, problem solving and perseverance. Additionally the blocks make great landscapes for other toys – acting as anything from construction truck materials to prehistoric caves and mountains.

But back to deciding which Tumi Ishi to buy…

In researching, I looked at Tumi Ishi offered for sale on Amazon and Ebay, as well as on Etsy and on Facebook – this included ads to other sites, as well as those made by people as a side hustle or home business selling direct to parents in FB groups.

What I saw, and how it informed my approach to making Tumi Ishi:

If you’d like to know more, my Tumi Ishi wooden balancing stone sets are available for sale in my Etsy store at https://www.etsy.com/uk/shop/UKTreeHouseToys. 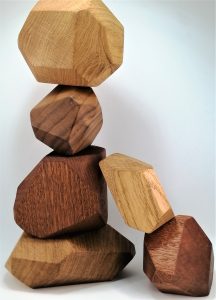 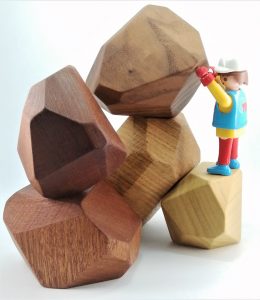 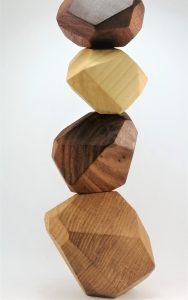 or … how I started making wooden toys

I guess I have always been interested in traditional toys. One of my earliest memories is from 3 or 4 years old, when we visited a neighbour who had a suitcase full of mechanical wind up toys. Looking back, I assume he was a toy salesman or something, but I have always remembered  what seemed like a treasure chest being opened, and toy after toy scurrying around the edge of the room. This would be about 1963 or 4 and fitted carpets were of the future; our rooms had a square of carpet in the middle, with polished wood or lino round the edges – perfect for toy cars and wind up toys.

As a young adult I wanted to make toys, but skills, tools and space were always limited. I recall attempts at making puppets, kites, toy theatres, and more – with varying (mainly disappointing) results.

Fast forward to 2014 and my first granddaughter’s approaching 3rd Christmas, for which I decided I was going to make a doll’s house! Although I had never done anything like this before, I think a combination of miscellaneous skills picked up along the years, the right tools (or the ability to get them) the internet for research and software for designing made it achievable. I  must confess I did not make furniture or residents, but I was delighted with the result, and fortunately Mindy was too.

2015 is granddaughter #2’s 3rd Christmas and of course I can’t leave her out, but don’t want to  do another doll’s house (by now there are 4 granddaughters  across 2 couples and I’m thinking they don’t want 2 doll’s houses per family) so decide on making a castle. This is in fact a mini doll’s house as the rear of the castle, with a courtyard in front, high castellated walls and 4 towers, finished off with a dungeon, drawbridge and portcullis. All scaled for Playmobil Knights.

2016 and 2017 I get a break from these big projects, which is just as well because looking ahead I realise the final 2 granddaughters both have their 3rd Christmases in 2018. For some reason, still not entirely understood, I decided that as I had to make 2 big toys at the same time, I would do something extra ambitious and make another all-time classic traditional wooden toy; Noah’s Arks. Big ones. And complicated, in a mix of hardwoods. WIth lots of animals (2 of each).

This was by far my most ambitious toy making project and took pretty much all my spare time for a year, especially the animals as most of them are made up of 3 pieces, which of course is x2 per ark, x 2 arks.  Plus Mr and Mrs Noah, and I had to be clever and add the snakes and some dinosaurs. By now I had a decent sized workshop however, and had started to equip it with bandsaw, router table,  scroll saw, drill press etc – all of which came into use on the arks. The arks themselves were made in alternating Oak and Sapele layers, the same woods being used for decks, stems etc. The animals were made from a variety of hardwoods to bring a variety of grain and colour.

And I made boxes for them to live in.

This was the toy-making project that started the “Wow, you should make those and sell them!” comments, but as I only half-jokingly would reply, if I accounted for the materials and my time (I’m not a fast worker as a rule) they would have to cost about £10,000 each! But it got me thinking about what I could make that would be satisfying to do, but efficiently enough that I could sell them for a price people would pay.

… and that, at the beginning of 2019, along with stepping away from my full-time career, is what led to TreeHouse Toys and the cars I make (the tree house itself is another story).  Careful design, sourcing materials, and small batch production all combine to allow me to make  real handcrafted wooden toys that are certified CE safe, and sell them for a price that is affordable in the marketplace. And a chance to combine toy making with my love of cars.

The first year of TreeHouse Toys ended with a few hundred vehicles having been produced and sold, with 10 different  Vroom models in 4 colours and 2 natural finishes,   2 different Blockster trucks, and 3  UK toy shops stocking them on their shelves.

Same wheelbase as our other Vroom vehicles – car, bus, pickup, hot rod etc – the BatCar has a distinctive bat-tail and a big bat-window that makes it easy to grab for smaller hands.

Finished in our new natural wax/oil finish that gives really bright/deep colours and is tactile and hardwearing.

Sneak preview of a new addition to the PlayPal Vroom series – a ’32 Ford.

Styled after probably the most iconic hot rod ever, this is John Milner’s car in American Graffiti (in fact we may only make it available in yellow 😉 ), and the Beach Boys Little Deuce Coupe.

For safety reasons the engine is under the hood, and this is based on the 3-window version. We managed to keep the chopped roof and visor along with a great stance on its big wheels.

Should be available within the next week or so, the first set of bodies are all cut and sanded.

We plan to sell directly from the website here soon,  but to get the toys out there to a wider audience while we develop this site and sort out online payments etc, we’re linking up with popular marketplaces Amazon Handmade and Etsy.

The first 4 PlayPal Vroom toys – bus, car, lorry, and pickup truck – are now available on both those sites. Each in 4 colours – blue, green, yellow, and red. In both cases they will process your order and payment, and we ship the toys to you. Prices and delivery are the same on both Amazon and Etsy so it’s entirely up to you which you choose.

They’re both a bit limited in how much info we can provide in their product pages, so this site still has the most detailed and background info – and the links on each product now point to the relevant Amazon product page. These links will take you direct to our storefront on each marketplace:

This little guy has been through a lot today. 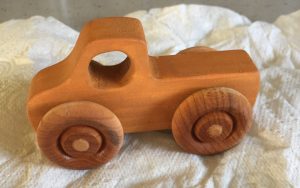 As part of our first prototype batch of PlayPal Vrooms he has been submerged over and over in warm water (everything stayed in place), he’s had his wheels twisted – hard (they didn’t come off) and had weights hung from them (they stayed on). Then he’s been dropped several times from a great height and had weights dropped on him.
It’s all part of making sure our toys are safe so they can carry the CE mark and I’m pleased to say he passed with flying colours.